I’ve been trying not to blog too much because I was having trouble keeping my current happenings a secret. But guys— I HAVE AN ANNOUNCEMENT!

And before you even think it– NO. I am not pregnant.

But my Book Baby is one step closer to being born. And I have news…

I HAVE AN AGENT!

Like a real one. A real literary agent! Like one who will represent, not only my book THE TRUTH ABOUT TWO-SHOES, but also my writing career as an AUTHOR!

The agent round for Pitch Wars arrived, and I was pumped. They featured my first 250 words and a 50 word pitch (view my entry here). But man, when I saw the other entries of my fellow Pitch Wars mentees— I was blown away!!! Everyone was so talented, I was suddenly so nervous I was going to be lost between the cracks.

Ask my coworkers. I was a crazy mess. By lunch time, people already had like six requests and I had none. While super happy for many of my Pitch Wars friends, I began losing hope that Pitch Wars would be my way to an agent and figured I should start getting my queries ready to send out.

But then something amazing happened. Agents saw me. And loved me. In the end, I had five requests on the blog and two private “ninja agent” requests via Twitter. I was BLOWN away.

One Ninja Agent saw me only because my Pitch Wars mentor’s BFF Rachel Simon decided to tweet about my entry to support me. One of her agent sisters saw it and tweeted it as well. And as a result– their agent saw my entry too.

Via Twitter DM, Carrie requested I query her and within a day asked for my full manuscript! I was on cloud nine!

After I got my seven requests via Pitch Wars, I sent a handful of queries out. Almost immediately I started getting requests for fulls. I was beyond flabbergasted. I’ve queried three other books before (given, none as awesome as THE TRUTH ABOUT TWO-SHOES. I revised this manuscript more than any other ones I’ve ever written), but I’ve never gotten so many responses.

In the end, I got 14 requests for further materials between querying and Pitch Wars. That’s a LOT of important people willingly reading my book.

And when I got my first offer and had to nudge the rest, it turned into an avalanche of both more requests, rejections, and calls. Two weeks after Pitch Wars’ agent round, I had seven phone calls with agents (six offers and one R & R). Carrie was my second offer, and I immediately clicked with her over the phone. She loved my book so much and had such great ideas for it. She also saw the other projects I was working on and was just as enthusiastic about those. At one point, she said the biggest compliment I’ve ever gotten in my life when she was talking about my talent as a writer: “I’d read your grocery list.”

But I talked with more agents, listened to their visions for my book, contacted many of their clients to see what it was like to work with them, and quickly learned that no two agents or agencies were the same. All the agents were fabulous and were so sweet to believe in my book. Making a decision was literally agonizing. Just ask the Hubs who ran out to get my ice cream one night so I could wallow while watching The Mindy Project as I tried to sort through each and every agent’s vision for my book.

But at the end of the two weeks, I couldn’t stop thinking about Carrie and how much we just clicked over the phone. So I called her up again with some more questions to make sure I felt the same way still and I DID!

And now I can finally announce that I am an author represented by Carrie Howland of the Donadio & Olson Agency!

And just FYI because I think it’s cool…that’s THE AGENCY WHO REPRESENTS CHUCK PALAHNIUK — THE AUTHOR OF FIGHT CLUB!

Carrie is so fantastic, and I am beyond thrilled to start working with her. This is an exciting new step in my author career, and I still can’t believe it’s happening.

Ironically enough, after her offer call, even though it was the second one and even though I didn’t know I was going to accept then, my neighbors and husband agreed we should celebrate since I didn’t get to really celebrate after the first offer because we already had plans that night– so we went out and got Chili Cheese Fries (because they are actually a part of my book lol).

So we are sitting there and my husband goes, “Wow. Did you realize you’re wearing a red cardigan today?” If you haven’t red my book, you don’t know that my main character wears the same red cardigan on occasion throughout her pregnancy despite how it gets tattered/doesn’t fit anymore.  I looked down at my cardigan and argued it was wine colored but he continued.

“I’m so telling people you wore a red cardigan eating chili cheese fries after that agent call.”
“Haha. Please don’t. People will think I’m weird.”
“Can I if you end up with this agent?”
“Uh..sure. I guess so.”

So, I’m beating him to the punch. Hey guys. As a weird as fate would have it, the night I talked to my future agent, I wore a red cardigan like my main character and ate her favorite food  (I swear none of this was planned lol). 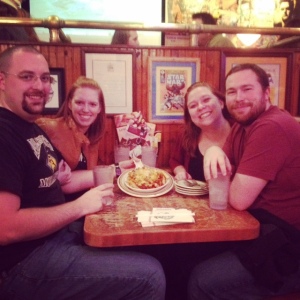 Thank you to everyone who helped me get here. Obviously Mom & Dad for encouraging my writing, and my husband Addison for letting me spend so much time these past few months working on nothing but my novel even though it meant the house was a pretty big mess. Thank you to my AWESOME Pitch Wars mentor Rachel Lynn Solomon for her help revising THE TRUTH ABOUT TWO-SHOES, her crazy awesome advice handling query/the calls, and putting up with my stressed out moodiness. Thanks to the beautifully awesome Brenda Drake for running and organizing contests like Pitch Wars. Thanks to my writer friends–both old and new– especially my trusty CP Emily who watched my brain explode constantly via Skype.

Oh and thanks to my cubicle neighbor for putting up with my incessant talking about all this stress. She’s wonderfully patient.

I still can’t believe that my dreams are coming true! Stay tuned for further progress on this epic adventure ❤