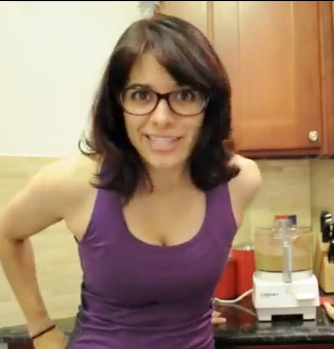 Meet Alyssia Sheikh– the genius behind Mind Over Munch. Watching her cook is like watching Harry Potter’s magical sister change the world with a wizardy spatula. You have to see it for yourself!

Okay, you may think I’m biased here, but I promise you I’m not. It just HAPPENS that an old high school buddy/the president of our high school’s drama club my senior year started probably the coolest health-meets-cooking online show I’ve ever seen.

I’m so excited to introduce you to Mind Over Munch— which is also a handy, dandy awesome website I frequent (and pin) regularly.

Seriously, it’s fun, fast-paced, and fantastic! I was truly impressed. What was even more entertaining is that everything about this video is edited to perfection and super quirky in the best possible way. Think of it like a better version of Alton Brown’s show “Good Eats.”

I seriously cannot rave enough about this Youtube video so I’m just going to post it now before I continue rambling. Her first episode is a awesome recipe for chai spiced peanut butter. I’ve been toying with the idea of making my own nut butter recently and now this has finally given me the push to try it!

What gets me even more about this awesome new series is the quality of everything in it. I recently just finished watching all of this past season’s The Next Food Network Star on Hulu, and I think Alyssia could give all those jokers a run for their money with an engaging show that could really improve a lot of people’s lives.

For example, I really enjoyed the contestant Nikki Dinki on this past season’s competition, but when she didn’t win The Next Food Network Star, I decided to find her own cooking show on Youtube because her concept “Meat on the Side” sounded just like the way I cook and something I’d be interested in. When I finally checked it out, I was slightly disappointed. Sure, she has some good stuff on there, but overall…It’s…. just ok. It’s pretty drab. I’m not going to lie.

But Mind Over Munch? It’s like Harry Potter’s magical, estranged sister stepped into the kitchen to change the world. Who doesn’t want to watch that? I’ll be checking it out every week. That’s for sure.

And yup, the world she will change– one awesome episode at a time. Subscribe to her channel and leave her some love on her Facebook page. Tell her Mrs. Healthy Ever After sent you!

One thought on “Greatest New Youtube Series: Mind Over Munch”