This weekend, I decided to do a solo juice fast.

It didn’t work. In fact, I only juiced a little. But hey, baby steps right?

That’s why I didn’t announce it to the world that the Hubs and I are starting a juice cleanse. I wanted to wait until we officially survived the first day (you know, in case we failed terribly). But yesterday was indeed that day and we did, in fact, survive.

And I feel GREAT. Addison was actually so full, he didn’t want to drink the last juice of the day.

But oh no…that doesn’t mean there’s not temptation afoot. In fact, I think it’s more of the feeling of eating that’s weighing him down. Just look at what the little booger posted on my wall.

And yes, that is unfortunately how we talk to each other on Facebook.

So naturally, I bought us packs of gum and told him to chew on that if it’s really the chewing that’s the problem. Oddly enough, it satisfied the psychological hardships for us.

But yeah, we feel great. It’s like drinking turbo coffee in the morning without the jitters. It was just really difficult at night when you’re used to winding down to a delicious meal, or some popcorn with a movie or some ice cream….

Yeah, I’m torturing myself. I realized I’m a glutton for punishment when I thought it would be a great idea to go on Pinterest for like an hour last night. For the record, DO NOT DO THAT if you’re on a juice fast. You’ll go coo-coo.

We’re following the Reboot My Life plan which is associated with the Fat, Sick and Nearly Dead documentary I love so much.

We started our day with a delicious Carrot, Apple, Lemon Juice. It was so delicious and refreshing! (recipe to come later) 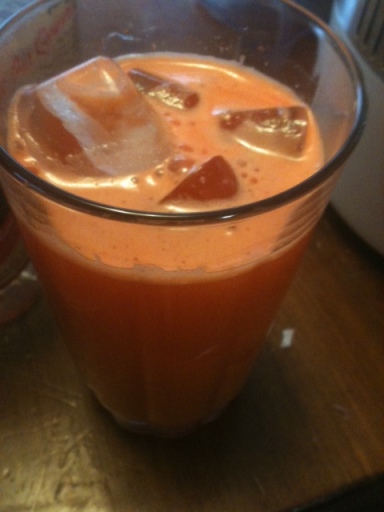 Then we had a lunch at work which was our favorite, Green Lemonade.

And then we tried something completely new…a “purple juice” (which honestly looked  more black than purple). Watermelon, Blueberry, Kale Juice.

This one was definitely different than the other juices we’ve tried before. We both agreed we’d put more blueberries in it next time (recipe to come later!).

Everything has been really delicious and surprisingly filling. We were going to have a Mean Green Juice for dinner, but saved it for breakfast instead when we weren’t really hungry.

We’re not doing this to lose weight or to crash diet. We just wanted to cleanse ourselves and get a fresh start. I’ve done lots of research on this and figured why not give it a shot? We’re only committing to three days, though I’d be up for going longer. The main thing that deters me from going longer than three days is honestly the cost.

According to the documentary, it costs like $14 a day to do a juice fast for one person. Sure, that’s not terrible. But when your food budget is way less than that, it’s harder to swing it. So, we’ll see how it goes. The important thing though is to make sure we incorporate fresh food in our diet the right way afterwards. I’m already planning some veggie rich meals to wean us back onto solids. Don’t worry! I’ll definitely share the recipes when the time comes!

Has anyone else ever done this? Have you ever considered juicing?