Best dish I’ve ever made.

I LOVE gnocchi. I used to make it all the time when I lived in DC because 1) I was a poor intern 2) it was very filling and 3) I could feed my friends without minding that they probably wouldn’t be paying me back because it was so gosh darn cheap to make in bulk.

If you don’t know what gnocchi is, it’s essentially pasta made out of potato. Other people have told me it is similar to dumplings. I have never made dumplings, so we’ll just stick to the fact that it is potato pasta.

AND it’s delicious…and cheap….and delicious….and you don’t need a lot of it to feel satisfied.

So with my brother coming to visit me last weekend, I wanted to make something special. I figured gnocchi was just the thing, even though I hadn’t made it in YEARS. The recipe for the pasta is very simple.

For every TWO servings you have the following:

And then just multiply it on up for how many servings you want. I stupidly tried to make a ton in bulk and didn’t finish rolling out my pasta before my brother came, so I have a huge lump of it still in the fridge. Here are the easy steps though:

1) Bake your potatoes (don’t forget to poke the holes around it with a fork first so they don’t go BOOM in your oven). 45 minutes at 400 degrees should work.

2) Then cut the potatoes in half and (while wearing mitts) squeeze the potato out of the skins in to a bowl and mash them. Then add yoke and salt, stirring well.

3) Slowly incorporate the flour until it starts to hold together and then transfer the dough to a lightly floured surface where can knead it like bread.

4) After that, roll it out into half-inch thick ropes. Cut with a knife at about 1/2 – 3/4 inch pieces. Press down with a fork to  make ridges if you want to get fancy. 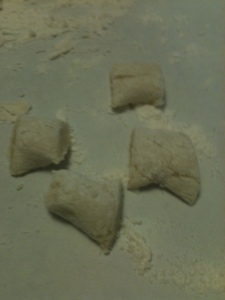 5) Then add the gnocchi to a pot of bowling water. Try not to over fill it. It’s okay to do this part in shifts. Once the gnocchi floats to the service, let it cook for 2 more minutes and then drain it. Then saute it in  a skillet with a little bit of olive oil just to make them nice and golden– if not a little brown if you like the added crisp. Then set aside for whatever scrumdidlyumptious recipe you’re going to use it for.

Which brings me to what I made my brother….. This is probably the best thing I’ve ever made. He even said he’d buy it at a restaurant. Big compliments coming from big brother.

Best dish I’ve ever made.

I adapted the recipe from Eating Well. And I added some gourmet, pre-cooked Italian pepper sausage because that’s something my brother LOVES. Because I added the sausage for added flavor, I didn’t include the lemon juice or parmesan cheese recommended in the recipe. Of course, you can use store bought gnocchi– but I like my homemade stuff. If you do get pre-made gnocchi, this recipe becomes 1000 times easier than any recipe you’ve ever done. It’s sure to impress.

For my version (which served 6), you need:

1) Sauté onion in olive oil on medium heat. After it starts to soften, add asparagus and chicken broth. Cover and cook until asparagus softens.

2) Then add the shrimp, salt and pepper.  Cover again and watch as they just turn pink in literally no time (well…more like 3-4 minutes).

3) After shrimp is cooked through, add sliced pre-cooked sausage and stir to incorporate all the flavors.

4) Combine veggie/shrimp mixture and poor it over your gnocchi, tossing it so it’s perfectly mixed up.

And ta-da! Easiest gourmet dish ever.

Plus, it’s healthy. You may be thinking– WHAT? Potatoes are NOT healthy. But honestly, potatoes have great vitamins in them as long as you don’t douse them with sour cream and butter and crap. Keep your oil to a minimum and only eat a small portion. I thought I took out a small portion for myself of this and ended up having to put half back. This dish will definitely be a rib sticker with small amounts— which is perfect for the family trying to watch their pennies and their waistlines.