When I started writing my young adult contemporary, THE TRUTH ABOUT TWO SHOES, I started thinking it was reminiscent of the classic TV show FREAKS AND GEEKS with a bit of the movie 90s movie SAVED! thrown in.

Without fail and without prompting, as my beta readers dug in, most would say either: “This reminds of me Freaks and Geeks!” or “This has such a SAVED! vibe to it.”

So, I decided to keep with my gut and pitch it as a story with a FREAKS AND GEEKS meets SAVED! feel. Disclaimer though– it does have its own plot and its not satirical like SAVED! But parallels are there apparently in the sense of friendship that is portrayed and the laughter amid dark topic component is definitely prevalent.

And that is why I thought it was only fitting to bring out the gifs to give you a teaser.

You see… it opens on a girl named Ellie who has a defaced locker because, well, the pregnant pastor’s daughter has become the talk of the school, especially in their largely Baptist community.

(Only it doesn’t say geek…obs).

But now that she’s pregnant, her boyfriend dumped, she’s all alone, and her friends won’t go near her because well…

And they don’t just kick her out. They’re actually pretty downright HORRIBLE PEOPLE to her.

But fortunately, she get’s adopted by a group of unlikely friends who are 1) amused by the addition of a former goodie-two-shoes to the group and 2) feel pretty bad for her. Only thing is, they’re a bit misunderstood.

In fact, instead of them being the trouble makers, usually Ellie is the one who tends to rain on the parade in the form of ambulances, cops and creepers…

And she certainly doesn’t fit in with them… 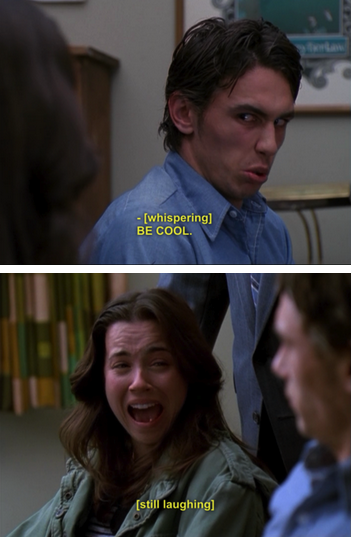 But despite how confusing her life is, how awful her former friends are, and how her pastor dad is ashamed to even be seen with her, Ellie grasps at the last fibers of her faith.

But Ellie has a lot of secrets, especially surrounding her pregnancy that she’d rather die than let anyone find out, even if it means letting others think the worst about her.

But then her new edgy best friend decides to help seek revenge against the guy who ruined her life.

(all right… all right…you caught me. That’s not Freaks and Geeks or SAVED! But I couldn’t help myself).

…And for the rest, you’ll have to read to find out. But I will tell you, unfortunately there isn’t any of this:

But…the comments from my Beta Readers make me do this….

So yeah! Be on the look out for the TRUTH ABOUT TWO SHOES! It’s going to be epic.

One thought on “The Truth About Two Shoes… Told Through Gifs”