If you know me (or at least read my blog), you know I’m one who LOVES a good kitchen appliance that can make my life easier, tastier and overall healthier. You’ve heard about Yonanas and of course my birthday food processor…but now I have two new favorites that have recently entered my kitchen. (And none of these are sponsored. I just really love the products).

As I delve deeper and deeper into my clean-eating journey, I’m beginning to discover things I never knew about the food I’ve been eating for years– like the day I realized I could make my own salad dressings without the crazy additives in the store bought kind. Did you know cooking sprays have many of the same issues? That’s when I discovered the MISTO. It’s a nifty little device that will make any oil you choose into a compressed spray. I LOVE IT. It works so great, and I don’t have to use half the oil I was using before (which is a lot considering us Italians LOVE our olive oil).

My mom actually bought this for me, and I have been in love ever since. I don’t think I’ll ever go back to the store bought cooking sprays. Not only is it healthier, but it’s overall cheaper to use my own oil entirely! Such a great product.

You may have seen this one floating around on Pinterest. That’s where I saw it (at least repinned like 50 times by different friends). So, instead of just dreaming, I bought it. It is seriously the coolest little gadget ever. Basically you insert a vegetable and twist…and it comes out like noodles! Zucchini goes through it like a dream (and the Hubs loves to be the one to do it). Carrots were a bit more trickier but it still worked out great, though we’ll probably use this predominately for zucchini which makes the best “faux pasta.” Basically, you get something like this when you do it:

Pretty nifty, right? So far I used it for one of our anniversary dinners and last night I tried to make cauliflower “alfredo” with it. Unfortunately one of our zucchinis went bad sooner than expected, so we ended up mixing one zucchini with about two ounces of whole wheat spaghetti. The combination was TO DIE FOR. And it would probably serve four people (I let Hubs eat a big plate of it since he killed it at spin class yesterday so I’m not sure we can stretch the leftovers for another two meals).

While I don’t think I’ve perfected this recipe, I figured I’d post it since someone commented on my Instagram/Facebook asking for it. Also while I may be critical about my experiment, I have to let you know that the Hubs literally picked up the plate and drank the excess sauce…so he was definitely a fan! 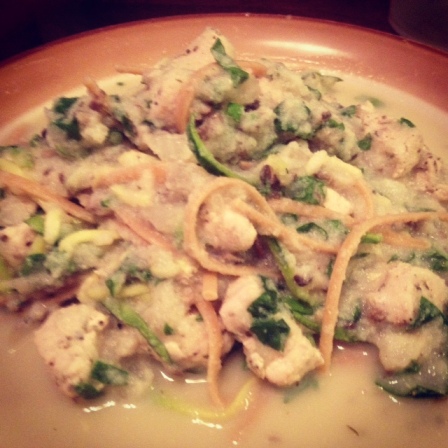 In all honesty, I used this recipe here. But I added a significant amount of red wine vinegar to add some zip to the dish. I’d recommend 1/4 cup or to taste.

1. Cube the chicken and toss in the olive oil, red wine vinegar, and seasonings. Set aside to marinate longer (up to 30 min is good).

2. Throw in the pan that you used to roast the garlic in the cauliflower recipe (see above). If not using same pan, spray more oil and cook over medium-high heat. Set aside once cooked. Feel free to toss it more red wine vinegar as it sets if you didn’t marinate it for as long as you wanted to.

3. Sauté onions for a couple minutes until translucent over medium high heat. Add mushrooms and sauté for a couple more minutes. Add zucchini noodles and toss it for less than a minute (unless you like really cooked zucchini but these noodles are great the fresher they are to avoid mushiness.

4. Reduce the heat to low. If you want a thicker sauce and believe your cauliflower has the perfect consistency already after following the recipe linked above, then be sure to drain the excess liquid from the vegetable pan. Then add the sauce and toss with all the vegetables. Stir in chicken and fresh spinach.

And voila! A hearty– yet very veggie-centric meal!

**Estimated Nutrition Facts (for whole meal w/ sauce): Calories: 450*, Fat: 13, Protein: 34, Carb: 45, Fiber: 10
*If you replace the whole wheat noodles with zucchini, you cut the calories by around 50 calories.
** Calculated through MyFitnessPal

One thought on “My New “Healthy” Appliances + Chicken “Alfredo” Recipe”