Today is Addison’s birthday and one month since we’ve been married! Hubs is very weird about birthdays. He insisted he didn’t want to do ANYTHING. Then out of the blue he was like, “Why don’t we go out to dinner to celebrate our one month anniversary?” And I was like, “Oh you mean for your birthday?”

He paused and slowly said, “No. I mean our one month.”

And then I said, “You mean your birthday.”

As you can see, this blissful newlywed conversation went on for a while, but in the end I got Hubs to admit it was his birthday for the sole purpose that we could get free dessert at Chili’s…for our one month of course. 😉

Anywho, even though he didn’t want a big deal for his birthday, Hubs did have one request. He wanted buttercream icing– kinda like what we had on our wedding cake.

Confession time. I have never ever successfully baked a cake from scratch. Even out of the box, I was only successful once. In fact, I used to make people birthday cheesecakes because I could convince them it was extra special and extra fancy, as opposed to a cake, because they were extra special. The truth is, cheesecakes weren’t extra special or extra fancy—I just can’t make cake. I’m amazing at cheesecakes but SUCK HARD at making real cakes. It just doesn’t work for me. It’s like I’m cursed.

I don’t know what possessed me to try to make a cake for Hubs. I just wanted his birthday to be special. I found a recipe on Pinterest for Chocolate Chip Cookie Dough Cake and figured that was right up his alley. The recipe seemed really easy (download it here from the blog I got it from), and the picture seemed too good to be true.

Too bad I’m not a baking master. Sure, I can make French macarons, fancy sugar cookies, and the best cheesecakes you’ll ever have (come over and I’ll prove it), but for some reason baking in general is ridiculously hard for me. My from scratch cinnamon rolls always turn into weird scones, for example. Or of course that time I made vegan brownies… However, I play it cool and confident and always convince everyone that it was intended to be that way.

Well… with this cake, I’m attempting to do the same thing. Hopefully it’ll work. Hubs is easily pleased, but my brother is coming to town for a visit and he’ll be a judge  for this cake, I’m sure.

First problem…I don’t have round cake pans. So, I used my spring form pans. Not really the same. Not really a good decision. You see, it came out of the oven like this….

But then transferring it onto my cake pedestal…

And this was going to be a two-tiered cake. Yeah… you can see how this went.

Well, then I had to make the edible cookie dough. But just my luck, I forgot the sweetened condensed milk and the only substitute I know for it involves raw eggs which defeats the purpose of making special “edible” cookie dough.

Luckily I found a great recipe for cookie dough that didn’t involve eggs or sweetened condensed milk. They turned out marvelous. Next was the buttercream. Now, I’ve never ever made my own icing. Ever. Not once. I’ve iced cookies with homemade glazes, but that’s not the same. So I tried to do it according to the recipe and whisk that bad boy over a medium heat.

It’s like cruel and unusual torture. In fact, I’m pretty sure in the 7th circle of Hell, whisking is a punishment. Plus, when I’m whisking, I get so frustrated, I like to pretend I’m ambidextrous and whisk with my left hand because my right arm is exhausted. However my lack of coordination then causes whatever I’m whisking to be flung EVERYWHERE around my kitchen.

Along with the mess, I always have this fear that my whisking will cause me to be weirdly uneven on one side of my body. You know…like….

As if you couldn’t tell, this has been photoshopped to look creepy.

*Shudder* Call me ridiculous, but I’d say this is a legit fear. No?

Well I whisked my little brains out. It seemed like forever and then it started to thicken. WHOO-HOO! At least I thought. I immediately tried to cool it off in the fridge (and then moved it to the freezer because I got impatient). The next step was to mix it with the butter and somehow my beautiful thick pile of goop turned into this:

Call me crazy, but that don’t look like buttercream frosting…or anything for that matter.

So I ran to Walmart and bought TWO containers of white frosting (and some mini cookies because I was supposed to decorate the cake with cookies but someone mysteriously ate half the dough. Oops :-/).

So then I started frosting this beast and it was like a bloody war. Every time I spread icing onto the cake, it was like a whole layer of cake came off with it until it was a shredded mess of white goo. I kept pressing on, fully aware that worst case scenario, I had a box of cake mix in the pantry as back-up.What’s the worst that could happen?

I sprinkled my edible cookie dough in the center since mixing it with the icing beforehand turned out to be nothing but more gooey weirdness. Then I popped the top layer of the cake on. Luckily, it didn’t do too much damage.

Well, until the whole cake started sliding to one side. I immediately took some of the cookies I bought and wedged them underneath the top layer of cake on one side, keeping it from falling. I then put more icing over top of those cookies so no one would ever know (well..unless they got that slice of cake. By the time I was done icing, the whole thing was pretty unsightly and falling apart. I knew the only way to save it was to cover it up and make it look intentional (my go-to for all things in life).

And thus, this cake was born: 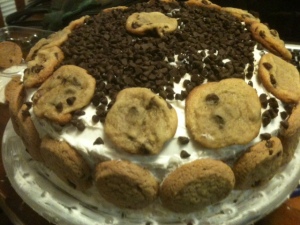 Upon seeing it, Hubs gasped and hugged my cake dome while whispering, “Well hello there, beautiful.” Little did he know, this was the byproduct of little blood, sweat and tears (did I mention I nearly cut off my finger baking this cake? Don’t ask me how. It just almost happened).

So yes…I survived cake baking this time. I just hope once we start having kids, they don’t get too demanding. Maybe I can be that weird mom who hands them a chunk of watermelon and says, “Happy birthday, Little Johnny. No refined sugar for you. It’s against our religion.”

Or maybe, just maybe, I’ll get better at cake baking by then….