My good friend DeDee and I were all excited to do a workout during The Vampire Diaries that I discovered on Pinterest only to realize there wasn’t a new episode this week! Talk about a Girl’s Night let down when we were all ready to workout after enjoying a feast of Asian veggies, steamed sugar snapped peas and of course, my vegetable steamed dumplings.

So we decided to pop in a DVD of Season 1 of “Lois & Clark: The New Adventures of Superman” because it’s one of my favorite shows that she also watched way back when. That’s when it hit us….Why don’t we create our own workout while we watch TV dedicated to this awesome 90s TV show? I mean, I’m sure other people love it as much as we do and want to workout too.

So we did. And we tested it out. And it’s awesome.

We did two episodes tonight and are SORE. It. Was. Fantastic.

We did have to modify a few things in our test run. For example, we had a great one for the character Cat. Basically every time she did or said something that warranted a call to HR, we had to “shake what our mama’s gave us.”

However, Cat only appears in part of Season 1 and we decided  we wanted something more applicable for all the seasons. Therefore, that piece of awesomeness was replaced by doing the Harlem Shake (ie. basically seizing) whenever Superman was affected by Kryptonite.

It’s quite affective. You should try it. It’ll change your life.

By the way, the plank part will kill you. I never realized how evident the 90s were in this show. From typewriters to pay phones and even ordering something on the phone from a catalog…or the attire worn at Lois’ first almost wedding– the 90s are everywhere and definitely not now. Though, my favorite by far was when it took her computer way too long to try to send the email “SOS.”

And doing the Superman move on the floor while he’s flying is pretty comical. You and your friends will get a workout just laughing half the time during your exercising experience with Lois & Clark.

Any other Lois & Clark fans out there? Try our workout and let us know what you think! 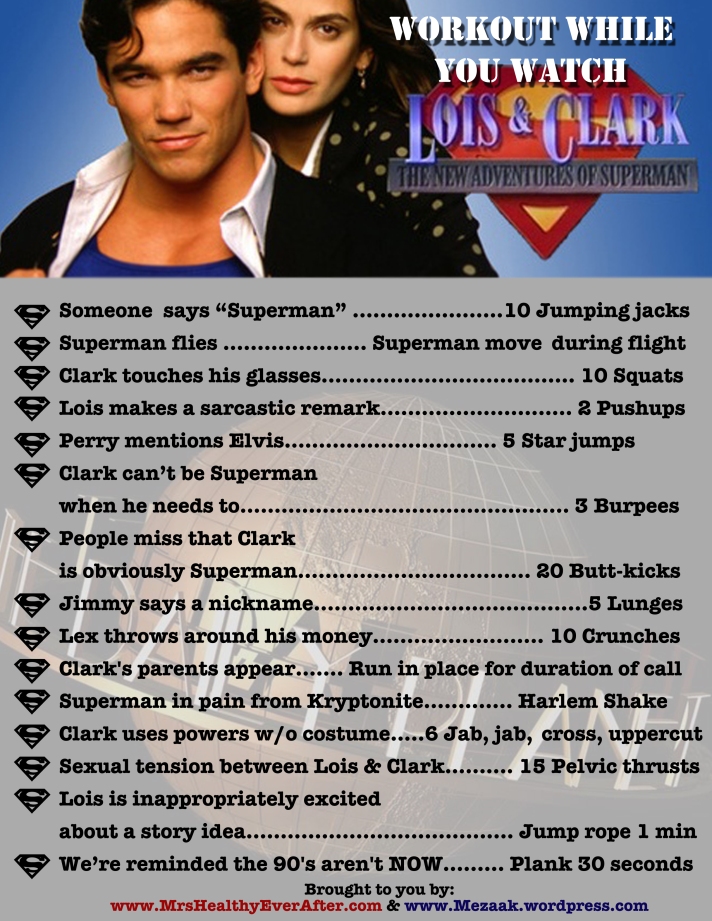 One thought on “Workout as You Watch “Lois & Clark: The New Adventures of Superman””