Whole wheat crepes with bananas and nutella. Best dessert ever.

Sometimes when I’m bored, I like to pretend I’m a master chef and try something new in the kitchen. This week, I decided I wanted to tackle crepes– but not just any crepes. I was super excited to use the whole wheat flour I had bought and see if I could make a healthier version.

And this was a big undertaking for me. You see, the only other time I have ever tried to make crepes, it was with my brother when I was 10. We fought over who could “brush the butter” in the pan, when in a fit of rage, I just threw cold butter on the super hot (super old) pan and it started to smoke A LOT while we were fighting. I finally conceded to letting my brother brush the butter when as he approached the pan, it BURST INTO FLAMES.

Alas, I had never made crepes since. Well, until now.

I found a crepe recipe here that I thought seemed pretty awesome. Instead of sugar, it called for honey (which I thought was pretty fantastic), so I decided to give it a go. I thought it would be a great dessert for Hubs and me, but in the end, I had SOOOO many, we had them for dinner the next night too. Keep reading for the entire recipe that includes a savory twist.

Just for the whole wheat crepes….

1) Mix all ingredients together. Cover and let it stand in the fridge for around 30 minutes (the original recipe said 15, but all the others on the Internet said between 30-1 hour. My batter was almost a little too runny and kept separating occasionally, so let it stand just a smidgen longer).

2) Heat an 8-inch pan on medium heat, and coat with a thin layer of butter. Wait until it gets pre-heated thoroughly.

3) Pour about 1/4 cup of batter into the pan and angle it all around so it thinly coats the pan. If your pan is hot enough, the edges should immediately show signs of cooking. Press those edges down with a spatula.

4) Let it cook for 1-2 minutes, until it is not liquidy on top at all. Then carefully shimmy your spatula all the way around the crepe, slowly working your way underneath. And flip it over. (God speed on that one)

5) Let it cook for about a minute more until golden brown. Transfer to plate (I layered mine with wax paper so they wouldn’t stick together).

Yields like a bazillion crepes (okay, well at least 12-14 small ones)

Now, I’m not going to claim to be a crepe guru. I am definitely not. In fact, check out my first attempt at crepe flipping.

My first crepe flipping fail. At least it tasted good! A small pan fixed the problem.

Yeah…pretty much a failure. I had used way too big a pan, I think. I know some people can make big crepes. But for this novice, it just wasn’t happening. Using the 8-inch pan worked much better for me. Unfortunately, I forgot to take a picture of a flat pretty crepe. But as you can see in the opening picture, this was served perfectly with Nutella and bananas. It was a marvelous dessert. Probably would make a great breakfast!

However, there was another problem. I now had 8 crepes left over. That’s a lot of crepes. So, I decided to take my crepes a different direction and use them for dinner the next day.

I added my own spin to this recipe for Chicken, spinach and mushroom crepes and they turned out pretty decent. I’m going to write what I did, but the main difference is I used parmesan cheese on top instead of Monterey Jack that was suggested (because that’s what I had).

1) Spray frying pan/skillet with cooking spray and sautee onions and mushrooms on medium-high heat until they start to brown and release moisture (roughly 5 minutes).

2) Throw in chicken, spinach and salt (and other seasonings if choosing so).

3) Melt butter in sauce pan over medium heat and mix in flour. Slowly add in milk while whisking. Whisk until “thick” (though, it really won’t get that thick). Season with pepper (or again, more seasonings of your choice).

4) Once thickened, pour sauce over chicken-spinach mixture and stir.

6) Once done, take remaining sauce/mixture and fill in the cracks.

7) Cover with cheese and broil on 500 degrees for around 5 minutes, or until cheese melts.

I served this with a beautiful side salad and Hubs LOVED it. Plus, according to the website, two crepes should have been around 400ish calories. Not bad for a dinner. Plus, there were tons of veggies involved. 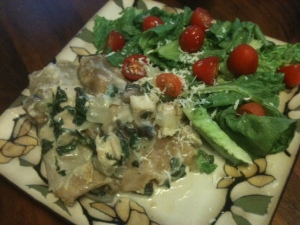 My one recommendation is, if you are planning on just doing savory crepes, maybe leave the honey out of the batter. It would make the crepes less sweet. Hubs thought they were perfect, so if you are a sweet-loving family who doesn’t mind a hint of sweet at dinner, it’s not like it would really make a huge difference. Just a note.

This wasn’t the easiest project I encountered, but it was definitely fun in it’s own way. I would definitely make crepes again for dessert. I mean…how can you say no to super thin pancakes, fruit and Nutella?

Have you ever made crepes?