We finally brought our baby home. At least, that’s how it felt when we finally plugged in our juicer which we bought, used, off of a classified ad at work. We swung by the grocery store to pick up our first bunch of juicing produce so we could start our adventure, but boy…we didn’t expect all of this. 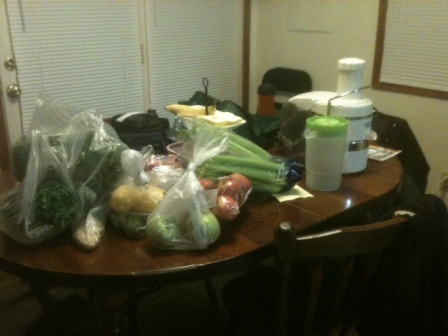 Yeah…and the real shocker is that this is only for like six servings of juice. Craziness. Addison decided he wanted to try the juice mentioned in the documentary, “Fat, Sick, and Nearly Dead,” called “Mean Green Juice.” Yeah…I wasn’t too excited about that. I was hoping for more of a sweet Apple-Carrot juice to start off. Well, since juicing was his idea and essentially his baby, I went along with trying the “Mean Green Juice” first.

Two make two servings, this is what it looked like: 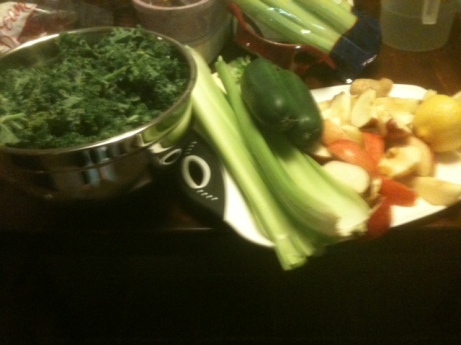 Yeah…that’s 12 cups of kale, two cucumbers, four apples, eight celery stalks, one lemon, and two inches of ginger. I hate celery. I hate everything about it. And when it went into the juicer, it smelled…..like celery. And this is what it turned out like: 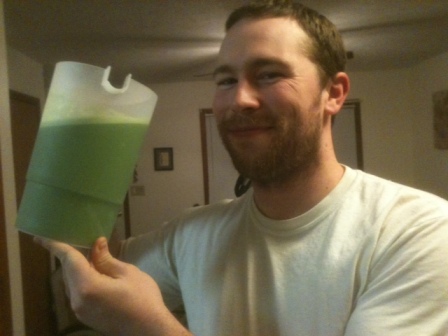 The husband was VERY excited. So we poured it over ice and gave it a go. I was super nervous but the result was shocking. It was, in fact, downright FANTASTIC. Seriously. It didn’t taste like celery. The finished product didn’t even smell like celery. It was refreshing, and… dare I say it? Actually delightful. The lemon and ginger undertones really just made the whole drink go together.

And boy did that recipe make a lot (I mean, just look at that pitcher!). Addison had two huge glasses last night. I had one after my workout (after our initial taste test). He even had left overs to fill his water bottle with and had some for breakfast the next day at work.

Here’s the crazy part. The 8 oz serving I had was only 35 calories, but packed a filling punch like none other. Addison passed up eating his usual oatmeal for breakfast to have this and was  full until lunch.

I mean… seriously. At work. Where coworkers brought in donuts for breakfast. He passed up donuts to drink kale juice. WHO IS THIS MAN AND WHERE IS MY HUSBAND? If that’s not a miracle, I don’t know what is!

Today after work, we tried the juice I was excited for: Apple-Carrot. For the two of us, it took six carrots and four apples. Boy, was it sweet! It was almost like a dessert! I guess that explains the difference in calories. An 8 oz serving this time is just a little over 100 calories.

Still, a fantastic snack and very filling. It helped me power through my workout with no problem. But the funny thing is…I almost prefer the green juice. Who knew? I never thought in a million years I’d like green juice like this, but I really really do!

And my Southern-bred, meat and potatoes man even suggested having another green juice tomorrow night for dinner. DINNER. Instead of food. Yeah…the world MUST be ending. While I love the juice, I don’t think I’m for meal replacement just yet– at least, not for my dinner. I love cooking dinner (which I have an epic recipe for Greek Chicken pitas from a slow cooker that I’ll be sharing soon!).

But I’m excited to really hit the ground running with this. I’m excited to see how it’ll affect our lives and our health, and I’m just excited to see Addison get excited about vegetables. He even named our juicer. Bet you no one can guess what he named it (feel free to comment below if you have a guess!). You won’t guess it in a million years!